Blabbering Blatherskite! As a kid in the 90's, the Disney afternoon was such a big inspiration for me, and ultimately it was one of the influences that guided me to be the artist that I am today.

Blabbering Blatherskite! As a kid in the 90's, the Disney afternoon was such a big inspiration for me, and ultimately it was one of the influences that guided me to be the artist that I am today.

It only seemed natural to pay my respects to such an impact by taking one of the Disney afternoon's most iconic characters, Gizmoduck, and making him shine in a new 3D medium!

The character, Gizmoduck, was 3D modeled primarily in Maya; however, parts, like the head and small details, were sculpted in ZBrush then baked into displacement maps and sent back to Maya. The character modeling took approximately a week while juggling other projects.

To complement the character 3D modeling and texture work, I decided to 3D model a small set of Scrooge McDuck's money bin and put Gizmoduck in some action poses within the environment. The digital set was modeled in just an afternoon taking approximately 3 to 4 hours with exception to the money bags.

The money bags were initially created in Maya using Bullet, a physics simulator, to produce coins laying naturally within a bag shape.
With the coins simulated and in the correct shape of a coin bag, I exported them out as OBJ and brought them into Marvelous Designer where I stitched one bag shape and formed it around two different clumps of coins. To read more about my coin bag process, go to my blog post "Hinting at Coins in a Bag with simulation."

To breath some life into Gizmoduck, in Maya, I built a full-body IK rig which included stretchy spines and shocks and a developed a system to handle the unique uni-wheel that we all know and love about Gizmoduck.

On top of the rigged body, I also created, a variety of corrective blendshapes and facial expressions, as well as, custom hand presets, like pointing, fingers spread and fist shapes, using set driven keys.

In Mari, I decided to only texture the character due to time constraints but used Renderman 22 to achieve interesting and cinematic lighting in order to enhance the props, environment and mood.

Click below to see the Gizmoduck Rig in action; 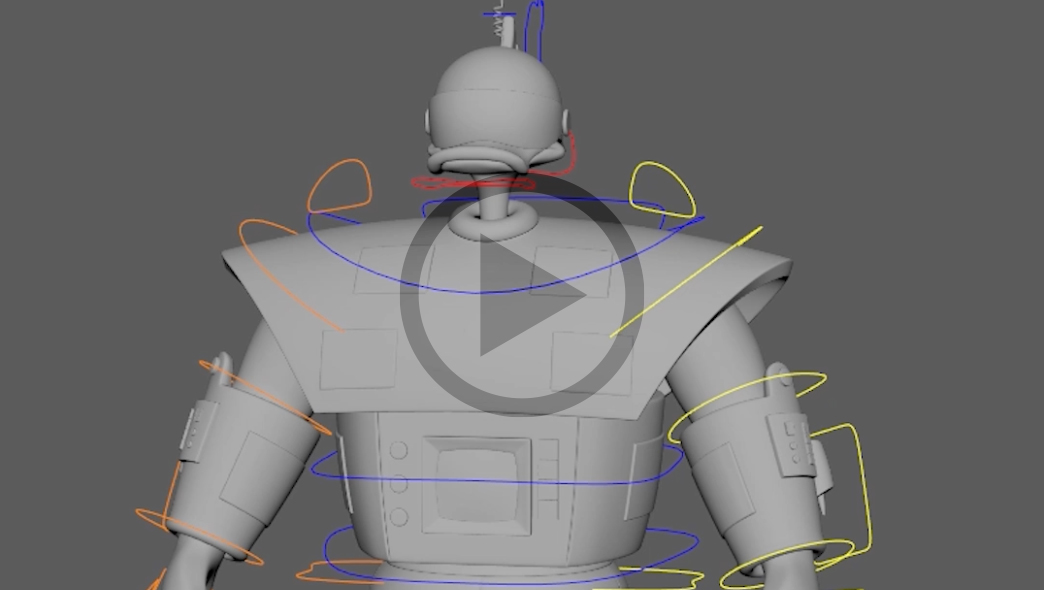 Modeled and rigged in Maya. The money bags were created using Bullet in Maya and Marvelous Designer. Gizmoduck was textured in Mari and rendered with Renderman 22.
Manage Projects